I have to warn you - this week is going to be a little light on knitting. I had a very productive weekend - just not with the yarn.

It started on Friday. Mom stopped by after work for a late lunch and brought the near finished Chocolate Covered Pinwheels quilt. As you may remember, I'd sent it off with her for quilting. She did that, and attached all the binding for me, all I had to left to do was tack it down on the back.

So I had an exciting Friday night ahead of me! I actually love doing the binding. I put on a good movie or show, and just binge watch while stitching it all down by hand. 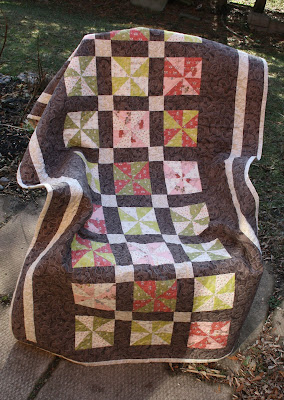 This quilt was started from a set of fat quarters Mom bought me for my birthday a few years ago. It was originally supposed to be for my bedroom, but I decided to change up the colours in there.  And then I decided, with a few tweaks, the old bedroom colours could become the new livingroom colours, so I decided it would be a great lap quilt. 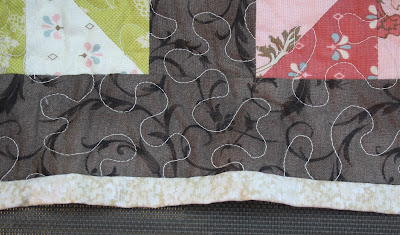 Here you can see Mom's lovely free motion squiggles, and the pretty chocolate brown fabric I picked out for the sashing. It was the only contrast colour I could think of that would work with the colours in the pinwheels. 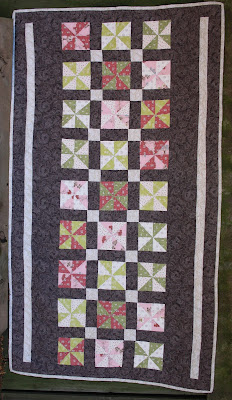 The binding fabric was a chunk I got in a clearance bin, and it was also used for the cornerstones and a nice contrast strip to build out some width the sides. 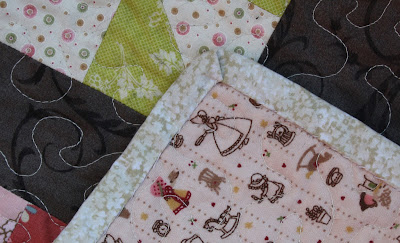 The backing was a chunk of Holly Hobby flannel I'd bought eons ago on clearance. I'd bought two large chunks to make receiving blankets  for a friend and never did. Then I plan to make Miss P and Miss Rowan jammie pants... and never did. But the flannel was the perfect size for this quilt, so it wasn't too hard of a decision to use it here. It's nice to have it out of the stash.

And as I said, the quilt was made for the livingroom. When I got the new couch, my plan was to get  rid of the ugly old worn-out futon. But Dave didn't' agree he liked the futon better than his arm chair. I offered to get him a more comfy chair, but in the end he won. And I'm stuck looking at the ugly old worn-out futon for a while longer. So this quilt couldn't have been finished at a better time... 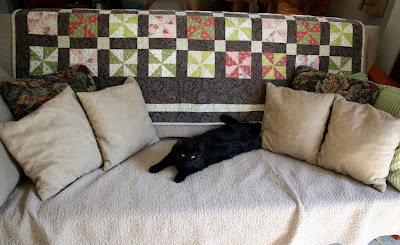 ...because that ugly, old worn-out futon needed something to make it less of an eyesore.
Posted by Wanderingcatstudio at 12:00 AM

The futon looks great with the addition of your lovely quilt (and of course, BURTON)! Burton makes every photo better.

What a fabulous finish!!! This is a stunning quilt and just right for perking up your futon!
What a great job.

I love it! Great job all around. Love the Oakville sock too.

Beautiful!! That brown makes the colored pinwheels just pop and it's Burton approved. :-)

Well done! I love everything about this quilt - the colors, the fabric, and the pinwheels. Enjoy.

How the heck did your mom do that wiggly stitching? Fantastic! Why do husbands like to hold onto old, yucky pieces of furniture?

I love how Burton is making himself look as big as possible on the couch. LOL So cute. Dying.

It's a beautiful quilt. I'm a huge holly hobby fan so that is like frosting on the cake!

Oh How I love the finish and the cat!!!! Nice job