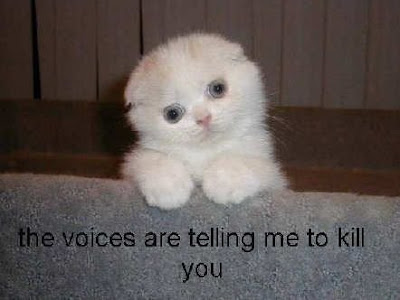 Posted by Wanderingcatstudio at 11:11 PM No comments: Links to this post 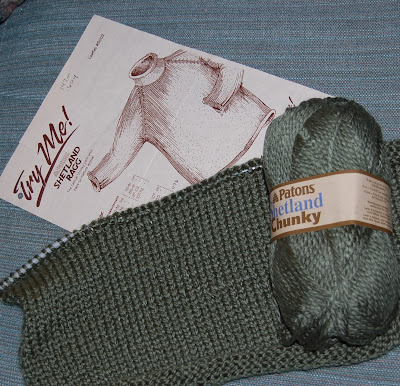 ...10 inches of fabulous cozy knitting. This is going to be my Dad's Christmas present, so shhhh...
It's a great Patons pattern my mom has had for years... a plain raglan sweater. She made my brother two, made Dave one, and now my Dad is going to get one too!
I was going to splurge on some nice alpaca, but then I remembered it's for my Dad. Not that he doesn't deserve nice expensive yarn (okay some days he doesn't) it's just he's... rugged...
This sweater will probably end up going fishing, hunting and maybe even working on a car or two. My mom made him a sweater years ago (it was dark blue with little red pine trees) and he wore it everywhere. He wore it so much he wore holes in it.
So, I settled on Patons Shetland Chunky, which while not as soft as alpaca, is still pretty nice, but can also be thrown in the washer.
Of course I shouldn't be knitting it at all right now, I should be working on more stuff for Vineyard Alpacas

This is just a simple feather and fan wrap I started on Monday. I dropped off two wraps, two shrugs and a purse (which I stupidly did not take an pictures of) the other day. She wants to have a special sale in Early June, so I have to get knitting.
So much to do, so little time... I think the kids have the right idea 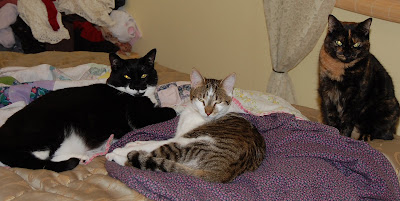 Posted by Wanderingcatstudio at 10:19 PM 3 comments: Links to this post

You know.... it would be nice if they showed "body shaping" lingerie on models who actually need a little body-shaping 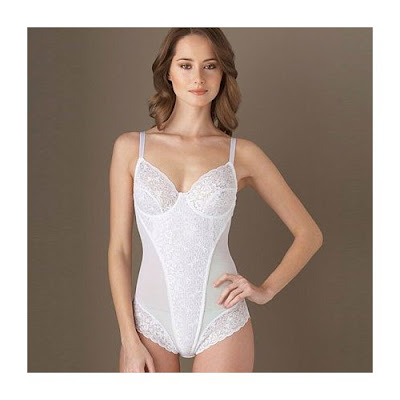 If this chick was any skinnier, I could snap her arms like a dry twig! What the f*%# are they shaping???

Today was a very sad day.
I looked up and realized my baby isn't a baby any more.
No more kitten... he is all cat 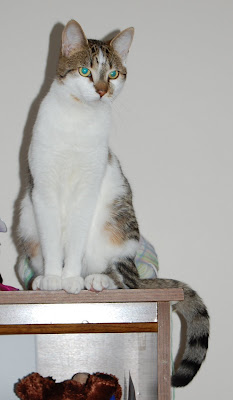 Posted by Wanderingcatstudio at 9:28 PM 2 comments: Links to this post

Okay normally I like to keep my opinions to myself unless asked for them (my rant about Bell being the exception) but here's something I have to make a couple of comments about...
I'm sure by now, you've already heard the story of the London woman who was fired for giving away a 16 cent timbit (if not go here... )

First.. I think most people are in agreement that firing her over a 16 cent timbit was a pretty bonehead move on the part of management... a warning would have been sufficient. (Although giving away a timbit to keep a regular customer happy should be applauded as a fine example of customer service, something Tim Hortons stores tends to lack... how many times have they gotten your coffee order wrong?).. but has anybody considered that the timbit probably wasn't really the reason she was fired?

I think there is far more to the story here. Management wanted her gone for one reason or another (whether it was personality conflict, or whatever) and they didn't have a reason to fire her (just so we don't get confused here, in Canada they don't need a reason, they just have to compensate you according to labour guidlines ie severance pay) She worked there for three years, so if they fired her without cause they have to give her three weeks severance pay. Now, if they fire her for expressly going against company policy, they don't have pay-up....
I'll bet they've been watching their surveillance tapes for a while, waiting for her to give them a reason.

Now second... and this is the part that really gets me... everyone seem's to be "applauding" Tim Hortons as a corporation for giving her job back.... now I want you all to seriously consider this... do you really think Tim Horton's would have given a rat's ass if the woman hadn't gone to the papers and garnered province- (if not nation-) wide media attention? I doubt it. I think this is a fine example of just how much power the purchasing public has....

Now if only we'd use it for good and not evil.... and by evil I mean, lining up through the parking lot and down the road for an increasingly inferior product. As recent as a decade ago Tim Hortons was a great place for a snack. Now their prodcut costs more, is smaller, and the quality has seriously gone down hill. In this area, they have effectively wiped out the competition, and as soon as that was done it was like they said, "F*** it! they have no where else to go, let's sell them crap!"

And sadly, like lemmings leaping to their doom, consumers continue to line up day in and day out for a crappy cup of coffee... whatever happened to making a cup before work and putting it in your travel mug?

Maybe with the price of gas, the lemmings will all wake up and realize how much time and fuel they are wasting, not to mention money.... if you don't count the wasted gas, consider this a 2-cup a day habit (and for many it's higher) costs approx $20 a week, thats $80 a month... that's more than I pay for hydro! Hell, that's just a little less than my insurance payment. That's just over $1,000 a year.... that's just sad... doubly so if you're one of those donut, bagel or sandwich people.

Something to think about.

Don't be lemming... just say no to donuts
Posted by Wanderingcatstudio at 3:42 PM 2 comments: Links to this post

I think I've really had enough of lace weight yarn..... the lovely Gillian at Vineyard Alpacas gave me skiens upon skiens of her beautiful 100 per cent alpaca yarn to make some stuff for her shop. I've made two simple wraps and a shrug, and yep... I've had enough. For the past week I've been trying to start a new project, and I knit about 10 inches, I look at it, feel utterly overwhelmed and to the frog pond it goes..... and I still have skeins upon skiens of it left... I think it may be time to double up, and knit something a little heavier.. or maybe I should lay off wraps for a while and knit a couple more shrugs.
I was so depressed I cast on a Christmas present. This one is for Rowan, who has yet to make her debut (expected at the begining of June, but apparently is already "in position" and could come any time) It's a baby shrug from the Fall 2007 Knit Simple and it's absolutley adorable (and I don't go all gushy at baby stuff) Of course it's done in baby weight, and well....... I bought some nice, quick knitting worsted and adjusted the pattern. (Dave was laughing at me because I spent half-an-hour at Wal-mart "fondling" the giant balls... of yarn. Some of the acrylic feels pretty crappy.) 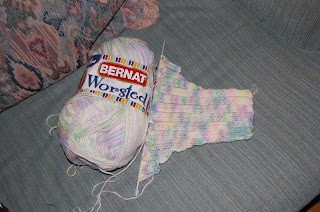 After only and hour-and-a-half of knitting I'm almost half done. Take that lace weight!
After a little more pattern adjusting, big sister Pee will be getting a matching one for Christmas too. Gotta love giant balls... of yarn with lots of metreage! (Mom - remind me that I have to measure her this weekend)
I've decided that this year everyone is either getting knitted gifts for Christmas, or hand drawn ones. I have a load of green yarn I bought on sale at Mary Maxim, so I expect to make a lot of green hats.
In other news, while I was working Sunday, Dave was a sweetie and moved my old mattress and boxspring downstairs so it's easier for me to put outside when I finally get around to calling the garbage men to come pick it up. (No, I can't donate it... it's waaaaaaaaaaaaaaay too worn out)
I like to think that he did it because he really wants to be helpful, but I suspect it was more because it was in his studio and he was tired of looking at it while he was songwriting.
Of course now it's in my front hall.. and the kids think it's their new jungle gym. 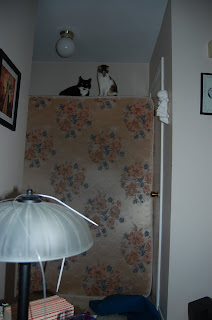 I've seen how Rocky gets up there.. and I imagine Tux gets up there the same way, but I've never actually seen him do it. It's really hard to picture him scaling it, paw over paw, draggin his fat behind up.. but that must be how he does it.
And of course, like most kids they can't share 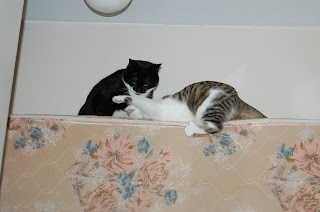 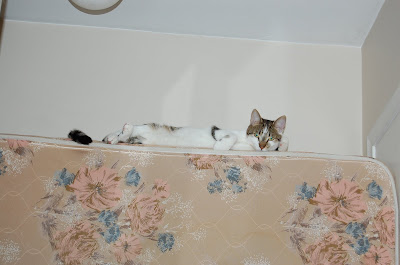 Rocky didn't really win the fight, Tux just got bored and left... it's that... or I was in the kitchen with food. I guess I'll have to splurge for a cat tree house.
Posted by Wanderingcatstudio at 10:00 PM 1 comment: Links to this post