The dangers of narcotics

A strange thing seems to be happening to me while under the influence.... I've an almost uncontrollable urge to be crafty.... or at least more crafty than normal.

It's happened a couple of times, the most recent on the weekend. While relaxing on the bed with a book, buried under a pile of cats, letting the soothing numbness of the painkillers take over, I got the sudden urge to cross stitch.

Yes. Cross stitch. I have a house full of crafts -- Sculpy, pencil crayons, crayons, paints, beads, and yarn galore. I have several projects on the needles, and need to build some jewellry inventory for an upcoming show... but all I can think about as I lie there is embroidery floss and the perfectly aligned weaving of aida cloth. The stitch, stitch, stitch of making little exes all over the fabric.

And it's not the first time for this strange yearning, it happened a few weeks ago under similar circumstances.

The problem is, despite all the craft supplies I have in the house, I don't have one ounce of floss.
I rectified the problem on Monday, and went up to mom's and stole our box of floss. 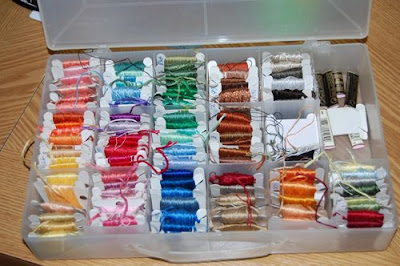 I say our box of floss because I contributed to it a lot over the years. You see, I used to cross stitch all the time. Well.... not all the time, as a child with undiagnosed ADD (okay mom says it's just a short attention span, but I'm convinced it's ADD) I cross stitched on a semi-regular basis.

It started after a trip to the Needlework Show in Toronto when I was about 8 years old. Mom had just started knitting for Julie who had a booth there. I was totally against knitting at the time, (knitting kinda snuck up on me and sucked me in a few years ago) but I was quite content to pick out things for Mom to knit for me.

Fortunately for Mom, there was a kids' activity section. I don't remember all the activities I did, but I did get to use a serger and make my own tank top (which was three sizes too big and I used as a beach cover until I was 13) and I also learned to cross stitch... it was a Christmas themed project (I think it was a stocking but it might have been a candy cane) and we used HUGE holed aida cloth (6 count I think) and dk yarn.

But I was hooked... or as I said... as hooked as I could be. I crossed stitched pretty steady at first, graduating from yarn to floss and 14 and 16 count aida. Mom bought me several pattern leaflets, and slowly we built up the floss collection. Grandparents got simple cross stitched pictures for Christmas, one of the most complicated projects was a butterfly I stitched for 4-H. I made my dad a sampler of ducks and it took me several years to finish.

As the years went by I stopped for a while, but I started again when my Mom found a beautiful leaflet of cross stitch faeries. I stitched the Fairy Godmother for Sam when she had her first baby. 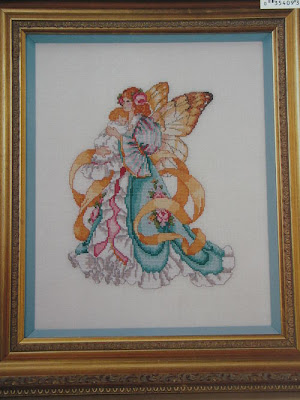 (Not my version.. this is the one from the book)
Both Owen and Lily have baby quilts with cross stitched centres, but I really haven't touched it since then.

But.. I want to start stitching again. I have a gorgeous pattern of a Sorceress done on black aida and I'm torn between it,and the forest faerie from the leaflet, which I've always wanted to do. 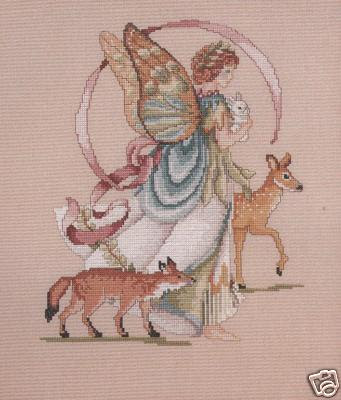 The Forest Faerie
While I'm deciding, Mom gave me a Debbie Mumm cross stitch kit she's had kicking around for a while: 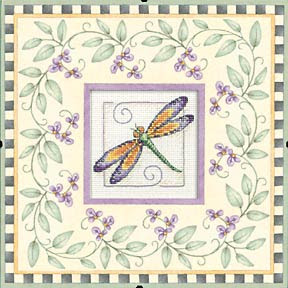 I've been picking away at it: 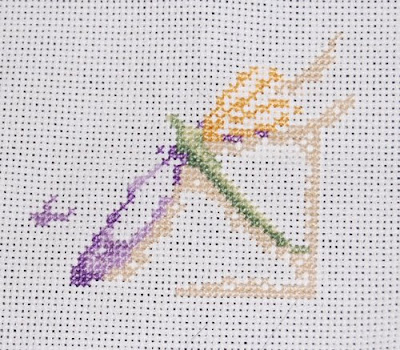 Definitely glad I started on this before tackling a larger project. I really need to get back in the swing.
Posted by Wanderingcatstudio at 11:29 PM

I'm with Rhonda. I want to see the ducks.

Isn't it funny how we get these craft cravings from time to time? I've been looking at cross-stitch kits again myself, and I find myself encouraging my daughter to take it up so I can live vicariously through her - always a bad sign :)

I used to cross stitch all the time. I still have all my stuff. I haven't touched it since I was pregnant with my oldest one, and he's nine. I ended up with tendonitis in my wrists and had to have cortizone. I find hold thing the cloth bothers my wrists loads more than knitting. If I knit too much, however, my wrists will bother me. Once in awhile I feel like cross stitching something small, but so far I haven't caved.

I've only done cross-stich once years ago - and my sister sort of forced me too (she is very much into it). I love the way it looks though - and your projects are so pretty!

Knitting Up A Storm said...

Thanks for the compliment! :)

P.s- I have a box of the floss-string just like yours. :) Back in the day, they were used on friendship bracelets and stuff.

Hubby pick that sucker out. Only a man could pick out a cross stitch that would take you ten years to do LOL I mean I set it down a lot to do other things but still!

I have a pooh bear one I pulled out the other day. It is maybe 2/3 done. I did a bit. I think it would be great to work on it a bit each day to get it done. Then I have a wolf one I have yet to start.

I am past buying anymore cross stitch. My container like the one your "stole" from your mom is used by the girls a lot to make bracelets and stuff.

If I could finish the pooh one and the wolf I would be happy.