Last fall, my boss (now former boss) was chatting with us about a conundrum she had.

The year before, her mother (who'd lived with her and her husband for several years) had died. And while they'd cleaned out, or packed away most of her things, there was one thing she felt guilty about throwing away - a garden gnome.

Anyone who knows my former boss knows she is not the garden gnome type. The fact that she even allowed her mother to buy a garden gnome and put it in their garden was a bit of a surprise - but it shows just how deeply she loved her mother.

But now here she was - she clearly hated the gnome, but said it felt like a betrayal to just toss him in the garbage.

Now me... I like gnomes (in moderation) and my garden didn't have gnome... and I told her I'd be more than willing to adopt him and give him a happy home.

So last fall, G'Nomeo (so named by my former bosses late mother), came to live with me.  He's been bunking in the dining room through the cold weather. But this past weekend, I decided it was time for him to get outside and see the world (or at least the backyard.) 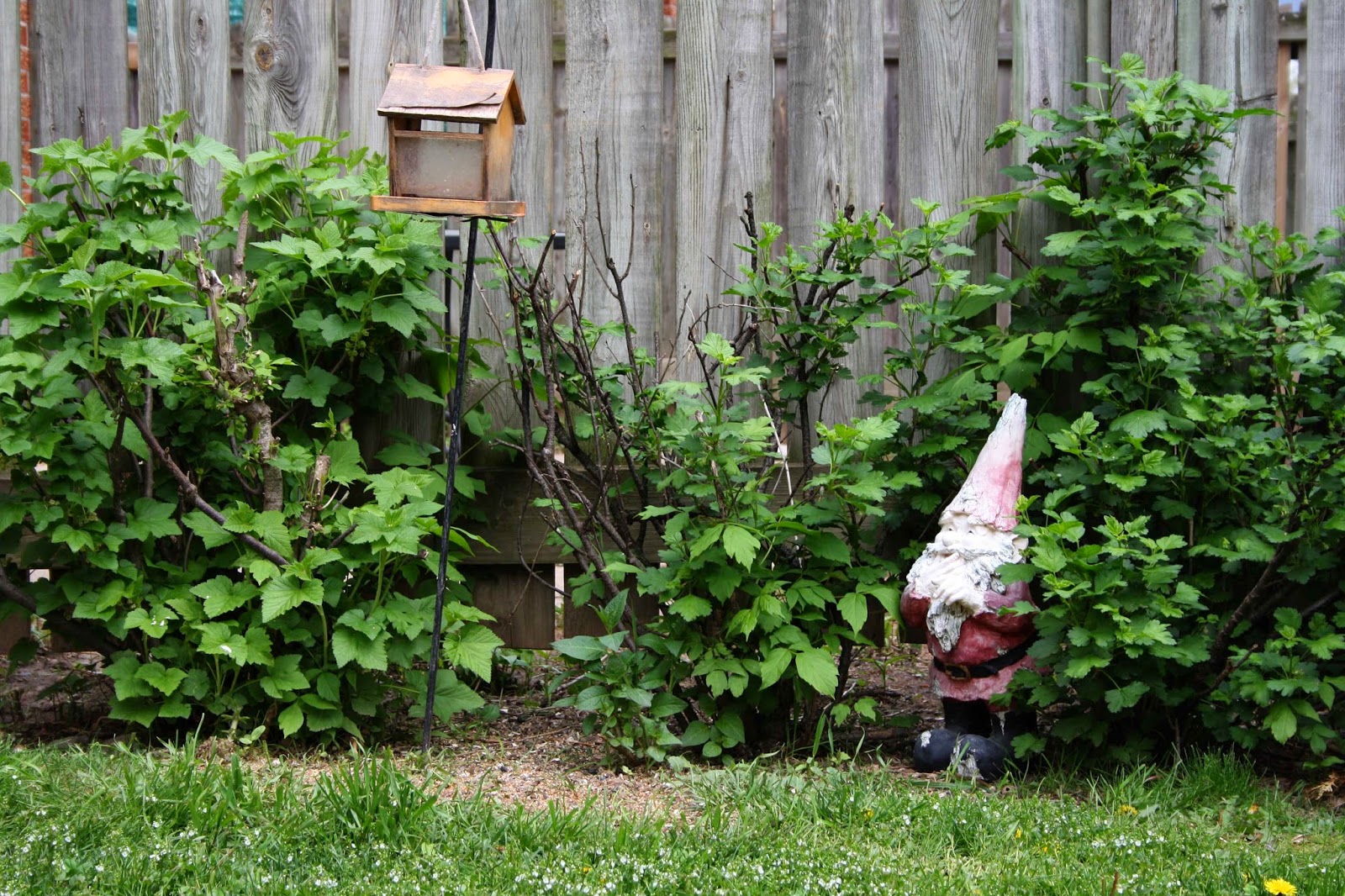 I found the perfect little spot for him amongst the Josta Berries (which have greened up nicely, despite my hacking) and under the bird feeder. 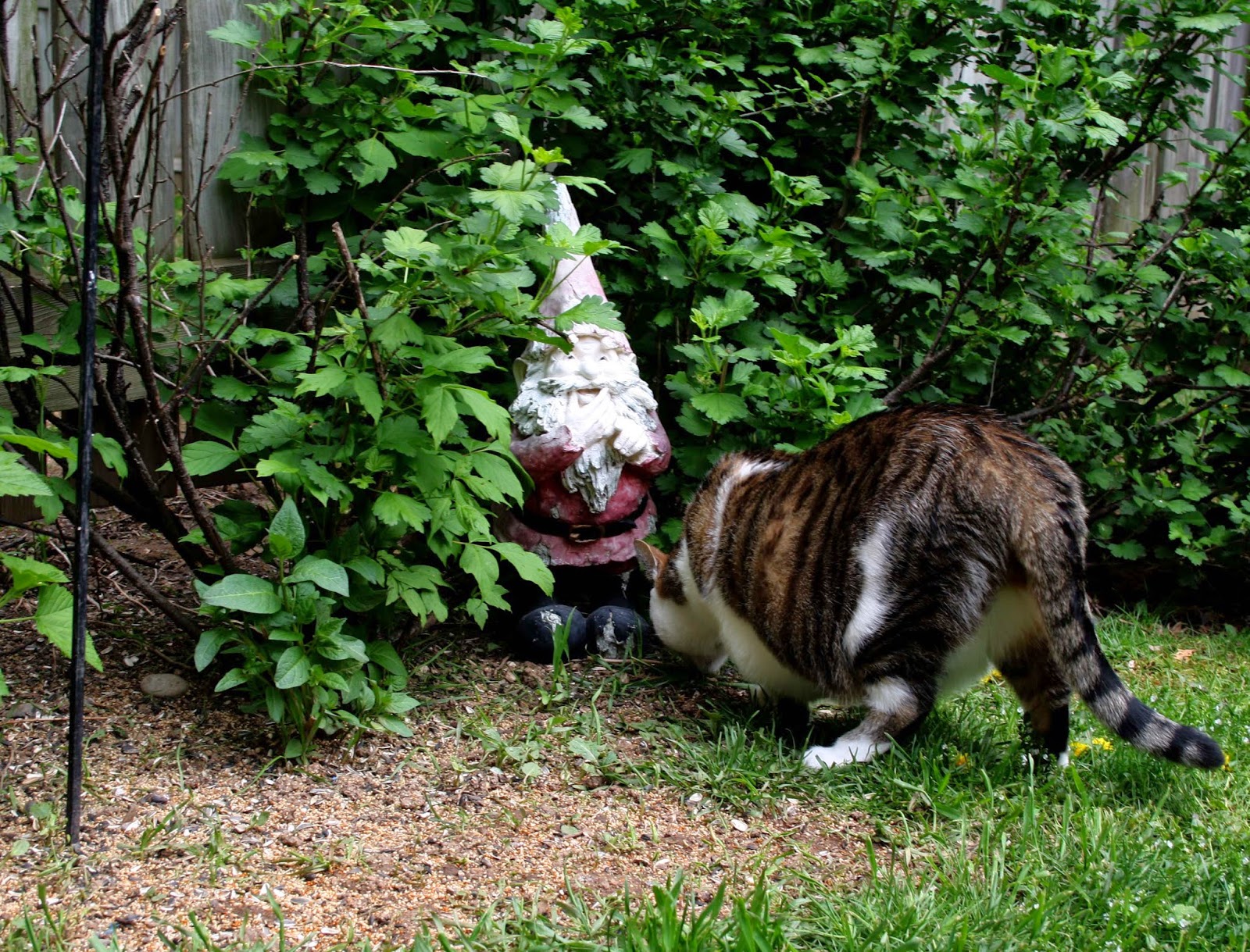 When the bee garden gets a little more robust, I may move him over there. But for now, I think he's happy in his new home. 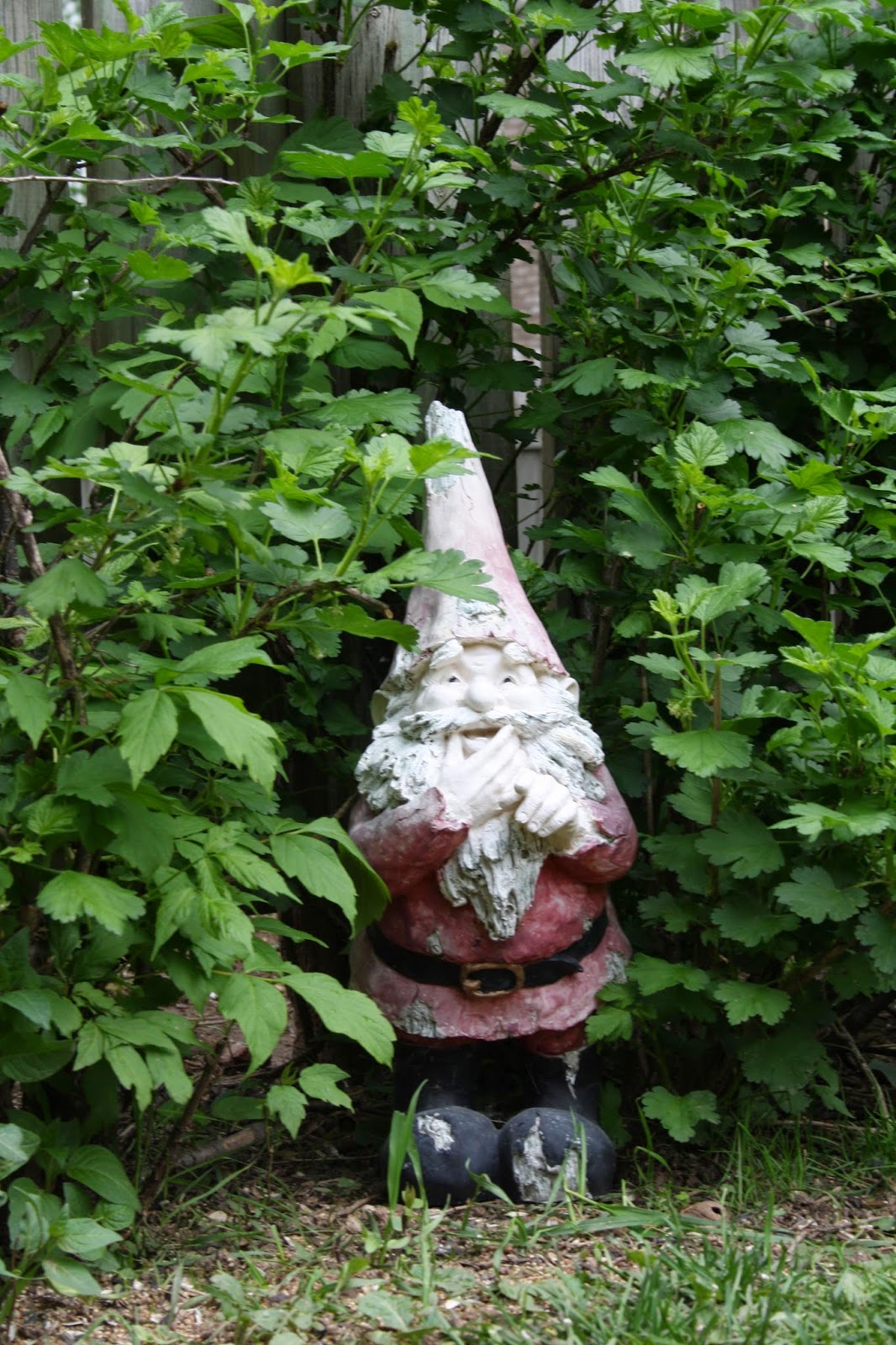 Posted by Wanderingcatstudio at 1:30 PM

He looks very happy in his new home. I'm glad you found a place for G'Nomeo.

He looks settled in nicely, lol. :)

I like garden gnomes too, not the tacky ones though. He looks like a nice gnome; reminds me of one I had as a kid and repainted. Unfortunately no-one knows what happened to him.

Minding My Own Stitches said...

Nestled in the branches he looks entirely comfortable. And somebody needs to be keeping a sharp eye on those cats!

awww what a perfect NEW forever home for him. I like a gnome here and there too

I don't have a garden. But I would be a gnome person in moderation. I admit we have a gnome book end that was gifted to my son for his birthday. We think he's awesome. I own gnome socks. I might have a gnome costume under my bed for Halloween, maybe. In moderation, like I said. Anyhow your garden looks fantabulous. I must be hard at work I missed so many wonderful posts esp. with Rocky in the sunshine and garden. My fave!

What a sweet story! I'm glad G'Nomeo has a home with you.

Thats great you adopted him, he looks like a proper old fashion gnome. I like them, but haven't found the right one yet.