Way back in the summer of 2006, I started working at a small community newspaper in the town of Port Colborne, ON. I was new to the area, so when I had a free moment, I'd leave the newspaper office and wandering around the town exploring. One day, a couple weeks in, I walked by a house that had a large flowering bush that took up most of the tiny front yard. What was remarkable was that it was absolutely COVERED in Monarchs. There had to be at least two dozen - it was like the plant was dripping butterflies. I'd never seen anything like it.

I had my camera with me and probably snapped a hundred pictures. When I came back to the office, I showed everyone, wondering aloud what the flowering bush was as it was nothing I'd recognized. It was the office receptionist who spoke up... "Oh, that's a Butterfly bush."

At first, I thought she was teasing, but no... it's just really aptly named. (Though it's Latin name is Buddleia). Ever since that day, I coveted the Butterfly Bush. When we moved here, it was one of the first plants I bought.

Disappointingly, the only thing it seemed to attract was moths. At night. I quite like moths (when they stay away from my yarn stash), but my camera is not great for night shots. I want butterflies!!! 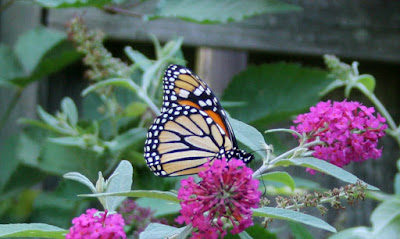 My variety of Butterfly Bush is Miss Ruby - a slightly purplish magenta. 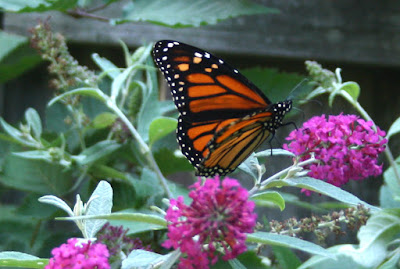 The bush is on it's third summer now, and it's not quite to the top of the fence yet - it's probably around 4 feet. She can grow up to about 6 feet though. 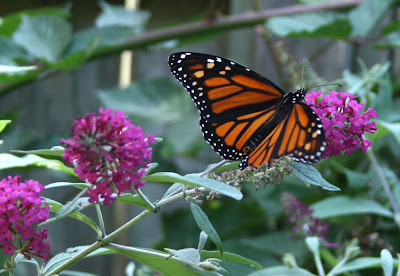 This far north, the bush dies right back in the winter. And it's one of the last to show signs of life come spring. I always worry that she's died off until I see those first few bits of green in late May. I've heard lots of people around here say that their bush didn't make it through winter, but I wonder if they just didn't wait long enough.

She's a late bloomer too. I'll get a couple flower spikes in mid summer, but they are usually small and weak. It's not until mid-August that she kicks it into high gear. Right now they're are probably 20 or so bloom spikes and some are quite large. She blooms right into fall providing some of the last bits of colour before the frost.

So here's to a few more months of wings and blossoms!
Posted by Wanderingcatstudio at 12:00 AM

We have that same bush and it's wonderful. I call it the butterfly magnet.

Isn't it just beautiful! It's been a long time since I've seen a Monarch.

I love monarch butterflies. I've seen a few around here, but not many.

Your photos are just lovely.

Beautiful! We don't have a Butterfly Bush (but we do - finally - have Milkweed), but several houses on our street have them. they are gorgeous. Great pictures!!

Oh that is a huge success. You worked hard for it. I LOVE monarchs and all butterflies. I need to go water my trees now. :)

"Buy butterfly bush" is now on my shopping list! I've planted lots of native Michigan plants in the yard, hoping to attract butterflies, bees, bats...but this is only my first year and I haven't seen any wildlife enjoying them yet. Perhaps a butterfly bush will be just the ticket!

Miss Ruby is gorgeous as are your butterfly photos. Her flower color in contrast to the wings!

So lovely! Well worth the wait. Now I want a butterfly bush too!

Gorgeous! I'm so happy for you-it is amazing to be so close to all the butterflies!
I love the butterfly bush-someday I will have one, too!